When Idris Elba was revealed to be the DJ at Prince Harry and Meghan Markle’s royal wedding, there was a collective, “Really?” As it turns out, even Elba was surprised by the gig. While talking to Ellen DeGeneres, the actor turned DJ spoke about the circumstances that led to him soundtracking the event of the year. Apparently, when Prince Harry first asked him to provide the entertainment for the wedding, Elba thought the royal was just kidding.

“Harry and I, we’ve hung out a couple of times through his dad, his dad’s charity the Prince’s Trust helped me out as a young actor. So I do a lot of work with them, Harry and Prince William a few times,” he said on The Ellen DeGeneres Show. “And Harry came to a couple of parties that I DJ’d, and he was like, ‘Hey, man, what are you doing on the date?’ And I was like, ‘Nothing.’ He goes, ‘Hmm, would you DJ at my wedding?’ I was like, ‘Is this a joke? Are you joking?’ And he’s, like, serious.”

Elba got over that initial surprise quickly, though, and said of the experience, “It was great.” Only DeGeneres could get Elba to open up about the experience, as when he was pressed back in August he played coy, telling The Observer, ”Harry’s a friend of mine,” and that the whole thing was “one of the highlights of my life.” “I try not to talk too much about it, because it was a private day, but it remains one of the highlights of my life, for sure,” he said, before adding, “It was a beautiful experience, like all weddings are.” 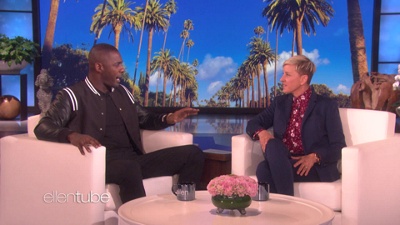 Sadly, we know little about the playlist that Elba drew from, though it’s been reported that Markle and Prince Harry had their first dance to Whitney Houston’s “I Wanna Dance With Somebody (Who Loves Me).”

We know a lot more about the ceremony, for which Markle and Prince Harry handpicked the music—a detail Kensington Palace shared in a statement at the time. “Both Prince Harry and Ms Markle have taken a great deal of interest and care in choosing the music for their service, which will include a number of well-known hymns and choral works,” the Palace said per the BBC. Their ceremony music ranged from American soul like Ben E. King’s “Stand by Me” to hymns. As for how it compared to the reception, we’ll likely never know—that is, unless Elba decides to go on Ellen again.