Back in 2008, one year before the MTV Awards that would make Taylor Swift a household name, the pop singer was a lot more open about her personal life. When she made her first appearance on The Ellen DeGeneres Show, she famously revealed that Joe Jonas had broken up with her not in person but with a phone call. Eleven years later, Swift is still thinking about that moment, as she just apologized for it on her latest Ellen appearance.

When asked what the most rebellious thing she did as a teenager was, Swift had a surprising reply. “Probably when I put Joe Jonas on blast on your show,” she told the host, who—like many of us—didn’t even remember the moment. “That was too much. Yeah, that was too much. I was 18. We laugh about it now. That was mouthy, yeah, teenage stuff there.” 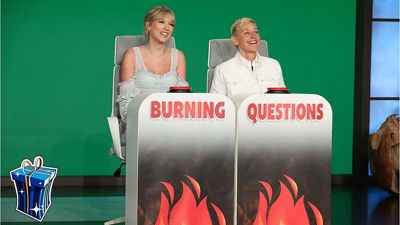 Of course, these days Joe Jonas has found love and marriage with the Game of Thrones star Sophie Turner. Meanwhile, Swift has been seeing the actor Joe Alwyn for nearly three years. When she was 18 on Ellen, though, she was dreaming of meeting someone like Alwyn, or really anyone other than Jonas. “We haven’t talked since [the breakup], actually,” she told DeGeneres then. “So it’s like, yeah, but you know what? Someday I’m going to find someone really, really great who’s right for me.… It’s all right. I’m cool. You know what? It’s like, when I find that person that is right for me, and he’ll be wonderful, and when I look at that person, I’m not even going to be able to remember the boy who broke up with me over the phone in 25 seconds when I was 18.” Ouch.

But Swift and Jonas have both done a lot of growing since that moment. Just four years ago, Jonas opened up about his friendship with Swift, saying that they’ve since reconciled. “She’s great. We’re friends,” he told Access Hollywood per MTV. “I think in this industry you meet a lot of people, and you stay in touch. Obviously, it’s tough to be friends with people that are always constantly traveling, but yeah, we’re cool.” Maybe there’s a double date for Swift and Jonas in the future.

Related: Taylor Swift’s “Me!” Video: All the Possible Hidden Messages