Since turning their backs on People, the Kardashian-Jenners have been looking for a new outlet. And if the past, extremely drama-packed week is any indication, anyway, it seems like the first family of reality TV has settled on having coy, on-screen conversations with Ellen DeGeneres.

The partnership really started when the host landed one of the most in-demand interviews around, getting Kim Kardashian to not only appear on air in the midst of a maelstrom of family drama, but also to comment on it all—and not mince words while doing so. (Her brief response to Tristan Thompson allegedly cheating on her sister Khloé, for example: “It’s so f—ed up.”) More importantly, though, DeGeneres then got matriarch Kris Jenner to appear on her show, to talk about a wide range of family secrets, from her own take on Khloé and Tristan, to her views on Kanye West’s recent, um, manner of existence.

While it has been rumored that Kris actually orchestrated the cheating scandal, in what would be a truly devious latest installment of her notably genius marketing schemes, the momager made it seem like she was unfamiliar with the rumors while on The Ellen DeGeneres Show this week, starting off by saying the cheating allegations were “unexpected.”

After lauding Khloé for being “just the best mom already,” she complied with DeGeneres’ pressing her to add more about Thompson, saying that the family’s response was as usual: to “spring into action with love,” hence them “all hopp[ing] on a plane and [flying to Cleveland because that’s what we know to do. (“There’s a lot of us and we all get together and we do things together and we’re a force to be reckoned with,” she continued, rather unnecessarily.) That’s all very sweet, except that DeGeneres then caught her in something of a bind in getting Kris to admit that the family had already planned to fly out to Ohio to be there with Khloé while she delivered True Thompson—to the point that Kris actually arrived with her daughter’s doctor when she was in labor.

Here, DeGeneres paused to do what anyone who’s even remotely been keeping up with the Kardashians has likely felt at least the tiniest urge to do for years: She addressed the elephant in the room, which was that given Kris’ reputation, she’d probably just lied about most of what she’d said. (Though if Kris was indeed telling the truth a minute or so earlier when she said that she does her best to “support [her] kids no matter what happens,” one can’t exactly blame her.) Kris summed up the whole saga by pointing out that she now has nine grandchildren, and which point without pause, DeGeneres neatly segued into remarking, “you’re so good at lying about them, too,” starting with the irrefutable evidence that the last time Kris was on the show, she danced around confirming or even discussing neither Khloé nor Kylie‘s rumored pregnancies, both of which she knew were of course more than rumors.

“Do you ever confuse your lies, like to me? Because you’ve lied to me all the time,” DeGeneres asked, to the audience’s (and Kris’ actually seemingly uncomfortable) laughter. She also asked if Kris manages to “keep track of what is on the show and what’s not on the show,” to which Kris responded, “I pretty much lead a very confusing life. I’m confused at all times,” agreeing with DeGeneres that that is her “natural state.” 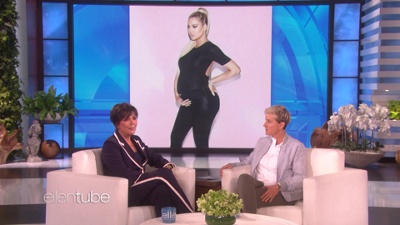 “It’s a natural thing. So I kind of just mumble along and, hopefully, you’ll believe it,” she continued. Degeneres quickly responded, “But I never do. I never do. I know you’re lying about everything, so whatever I ask you, I just automatically think you’re lying to me.” To that, Kris said, “I know … it’s like opposite day”—right before the clip conveniently cuts off.

For what it’s worth, earlier on the show, Kris also responded to DeGeneres’ question of whether or not Kanye was okay by saying “he always does things with really good intentions,” and adding that she can’t keep up with her family herself. (To the point that she “wake[s] up and need[s] a vodka.”) Of course, it’s now up to you whether to actually believe all that.

In 2011, Tyga and Kylie first met at Kendall Jenner’s Sweet Sixteen, where the rapper performed. Kylie was 14 at the time. Three years later, Tyga ended his engagement with Blac Chyna, the mother of his son King Cairo—and shortly after, began appearing on Kylie’s Instagram, prompting rumors they were dating. Both Kylie and Tyga denied the relationship—though it was the subject of a line in Drake’s “6 p.m. in New York” and the topic of some scathing words from Amber Rose—until the following year, when Kanye West let slip on The Breakfast Club. The gist of the controversy: Kylie and Tyga’s wide age gap, and the appearance that he left Blac Chyna for a teenager.

Kylie Cosmetics has been at the center of many of its founder’s controversies over the past two years—both because of the beauty brand itself, and because it has presented Kylie with a massive platform. For the brand’s Holiday 2016 campaign, which debuted in September, it released an image of gold-painted fingers framing a deep, cranberry lip—mirroring almost exactly an image by makeup artist Vlada Haggerty. Haggerty filed a suit against Kylie Cosmetics, but the feud was resolved before any court battle began.

Considering the previous Tyga drama, someone might have advised Kylie that naming one of her new blushes “Barely Legal” might not be the best plan.

Earlier this year, Kylie, one of the celebrity faces of Puma (like Rihanna, and like The Weeknd), appeared in a campaign in which she was depicted mid-running stride, in one image, and springing up into the air as if on a trampoline, in another. Just as her sister Kendall before her was criticized for appearing in a ballet-themed Vogue España editorial, Kylie was criticized for ostensibly taking the place of a real athlete in the campaign. Complaints about her running form—her feet not flexed properly, her knees not at the right angle—abounded, and then subsided in time for Kylie to appear in another campaign several months later.

Just after her brother Rob Kardashian was embroiled in his own controversy with ex-girlfriend Blac Chyna (the same Blac Chyna who was once engaged to Tyga), Kylie tapped her brother, sock entrepreneur and founder of Arthur George, to collaborate with Kylie Cosmetics. Many questioned the timing of the collaboration, as it was unveiled just after Rob had unleashed an Instagram tirade, including several graphic photos (that Chyna had not consented to be released), against his former girlfriend.

In the midst of building a beauty empire, Kylie also manages to balance collaborating with her elder sister Kendall on their Kendall + Kylie clothing label. As part of the brand’s most recent drop, the sisters debuted new “vintage” merch, featuring iconic images of the likes of Tupac and the Notorious B.I.G. with Kendall and Kylie’s own likenesses splashed over the front. The families and estates of the late rappers, as well as other artists featured in the collection, immediately struck back—and the tees were promptly pulled from Kendall + Kylie. (Since then, Kendall + Kylie has been struck by several lawsuits.)